In my wanderings around the web, I often find myself in themes and topic areas that end up tying together in interesting ways. This is a compilation of the blogs, books, and reading around a particular topic and my thoughts connecting them. 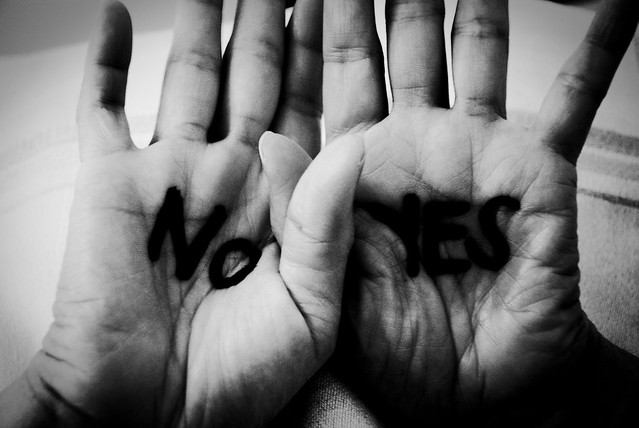 Photo by Ariel G on Flickr, via Creative Commons.

A question of consent and self-determination

The interplay between self-determination and consent culture has been on my mind, which has been playing out in my reading. The idea of consent (or enthusiastic consent) have proven very sticky wickets, because, frankly, the bright line between “yes” and “no” get very grey — not because “no” is ever grey — no means no means no — but because what all might be a “yes”, assumed, believed, implied, or spoken, gets complex when mixing together social, personal, and interpersonal.

Clear, unequivocal consent is the gold standard — the enthusiastic “YES!”. What it takes, in one’s own head and one’s own daily patterns of action, to have the self-determination to speak up in either direction, is where that kind of consent culture must begin.

Let’s start with Jill Malone, one of my very favorite authors and bloggers out there. In her post “Mine”, Jill discusses in beautiful detail the kind of unintional predator-prey relationship that a lack of boundaries can create, and what it takes to stand up to that.

That boundaries issue, and the challenging no-win type situations that trying to set those boundaries can create, are explored in this great Captain Awkward post.

“know that there is no perfect feel-good way to say “BOUNDARIES!” to people who are trammeling yours”

Which the Captain then points out that even when setting those boundaries, there are some people that may just not want to accept those that you set.

“With this group, it sounds like WHATEVER you say that is not “Oh yes you’re right thank you so much for your kind concern, I will do what you say immediately” will be taken as a) the HEIGHT of rudeness and b) proof positive that this boyfriend is a bad influence on you and that they are right to try to separate you.The game is sort of rigged so that if they win if you break up with him, they win if you go all out trying to convert him, and they win the longer they get you to pay attention to them and the more you try to convince them that he’s great, because it gives them the illusion that you care about their opinion about this and that they have power in this arena. Any of those outcomes validates the idea that they were right to speak up.”

And this kind of no-win situation, where any response is one that validates the opinion of the person expressing it, is one where the person expressing / touching / acting shows little respect for the idea that your boundaries are valid. It’s tough to not feel like a dick in that situation, because they’re the ones imposing their reality, and the social contract says we should adjust to match others as much as we can.

And sticking with the Captain, how that disrespect of your right to have an opinion is further higlighted in the post about trying to split the check with the in-laws, where the Captain points out how this kind of no-win situation gets set up:

“You say they are “sensitive,” aka, easily offended, which it sounds like they wield as a manipulation tool. Let’s break this down, shall we? They repeatedly act like total clods, leaving you to pay their tab, and then they are the ones who are offended if you bring it up? … And you are sort of …not allowed…to get offended yourself at their behavior? They are taking advantage of the social contract that says it’s rude to call attention to rude behavior, and deliberately trying to make it emotionally expensive for you to challenge them so they can keep enjoying the status quo where you take on the entire financial and emotional burden.”
“Only you and your husband can decide what feels right, just know: It will never change on its own. They will never get it on their own. Hints do not work, they just create a sea of plausible deniability for clueless and malicious people to swim around in.”

That sea of plausible deniability is one that is easy to swim in. Not actively looking for enthusiastic consent and/or assuming consent takes standing up to, not just hoping it will change.

“All of us – all of us – had stories about how, in the course of some treatment that we willingly undertook to look or feel better, the person doing the treatment touched us somewhere we weren’t expecting; touched us intimately; made us physically uncomfortable; hurt us or injured us. And none of us said a word at the time.”

Militant Baker: Why We’ve Learned To Hate Ourselves

Building the kind of culture where individuals don’t feel that the self-determination exists to say “YES!” or “No”, even in situations where they supposedly have all the power, becomes an in-depth discussion from the Militant Baker’s history lesson on self-hate, where she talks about exactly where this fear of providing or removing conset comes from.

“Fear can be a healthy response and is necessary for some forms of survival; we do inherently have fight or flight for a reason. But our hatred (which is fundamentally fear) of bodies that look different is learned. Its a scheme created by wealthy men in smoke filled offices over 50 years ago. Allow me to ask you this: are you going to let your value as a human decrease because of a business man who is no longer alive? Are you going to base your decisions on how you live your life on a profit scheme? Are you going to hate yourself for not living up to a standard that does. Not. Exist? Lord, help us all.”

The self-defeating nature of what comes from this fear is succinctly put in the great book When She Woke by Hillary Jordan, which I picked up at random while wandering through Powell’s Books clearance section.

“She was thinking about shame… what had carrying all that guilt and self loathing accomplished? Nothing, except to sap her confidence and enfeeble her. And she couldn’t afford to be weak, not if she wanted to survive. No more, she resolved. She was done with shame.”

Coming full circle, to what happens when a culture values speaking up and providing clear, consistent, and enthusiastic consent is discussed by Tikva Wolf writing in the Elephant Journal, when she talks about one of the biggest necessities in functioning, ethical non-monogamy — making consent and communication expected and sexy.

And while there are thousands more blogs, posts, stories, movies, and discussions out there about this expansive and important topic, I think the most important point made is this: that consent is a two-way street. Having the self-determination to actually stand up and express and opinion is the biggest piece of that. Respecting other’s ability to do so, and their opinions when they are expressed, is the other side. If no means no (as it should), then yes must mean yes. Both “no” and “yes” should be treated as complete sentences, because any further discussion beyond that is allowing someone else a level of intimacy that you have the right to consent to — or not.